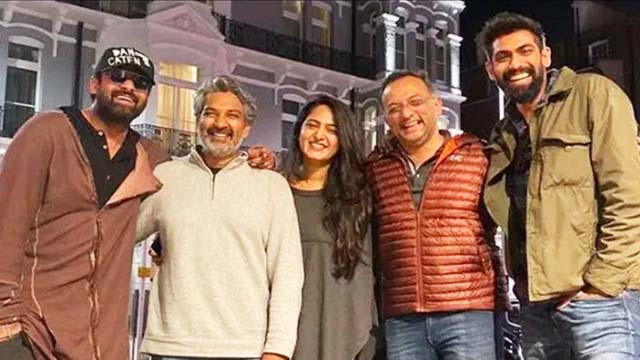 Mumbai, Jul 10 : Actors Prabhas, Anushka Shetty and Rana Dagubbati took a trip down memory lane to celebrate the five year anniversary of S S Rajamouli’s “Baahubali”, which changed the landscape of Indian cinema with its success.

Backed with a powerful storyline and breathtaking visuals, “Baahubali” created history in terms of commercial success of an Indian film globally and also increased the reach of regional cinema across India.

Released in Tamil, Telugu, Malayalam and Hindi, “Baahubali: The Beginning”, the first film in the series hit the theatres in 2015, while “Baahubali 2: The Conclusion” came out in 2017. In total, both films amassed over Rs 1,000 crore worldwide.

The official Twitter handle of “Baahubali” franchise thanked the audiences for their love and support.

“It’s heartening to see that even after 5 years, India is hailing #Baahubali and #5YearsForBaahubaliRoar is a top trend in India! Thank you audience for making our film a major milestone that will be celebrated for as long as Indian cinema is alive. Jai Maahishmathi! (sic),” the tweet read.

Prabhas, who gained global fame following the release of the film for his performance as the titular hero and his son, shared an unseen still from the movie to mark the occasion.

“Here’s to the team that created magic. Celebrating #5YearsOfBaahubali The Beginning, he wrote.

Apart from Prabhas, the drama presented Daggubati in a new light as antagonist Bhallaladeva. To mark the fifth anniversary of the first part, Daggubati shared a special video on his Instagram account.

Shetty, who essayed the role of Devasena, also shared the video on her Instagram and wrote, “Thank u all for your Love & Support.”

Producer Shobu Yarlagadda tweeted, “Very few people know what we were going through this very moment 5 years ago! It was the toughest day of my life to say the least! But glad to have survived!”

The first film ended on a cliffhanger and gave birth to one of the most frequently asked question in the history of India cinema, Why did Kattappa kill Baahubali , the answer to which was given two years later in the second installment.

The film narrates the story of power and greed through the eyes of King of Mahishmati, Amarendra Baahubali (Prabhas) and his wife Devasena (Anushka), who ruled the kingdom, where people were living at peace, until the cruel minister (Nasser) pair up with Bhallaladeva (Dagubbati) and capture the kingdom by killing the king.

Baahubali and Devasena’s son Shivudu (Prabhas), being orphaned due to circumstances grows up in a poor village and while pursuing Avantika (Tamannaah), Shivudu learns about the conflict ridden past of his family and takes revenge for his father’s death.

Tamannaah said the film helped her break away from a certain mould.

“This film leveraged my versatility as an actress and helped open many doors for me. If there is one film that put me on a pedestal, I would say it was ‘Baahubali’,” the actor said in a statement.

The film also featured Ramya Krishnan as Sivagami and Sathyaraj as Kattappa.